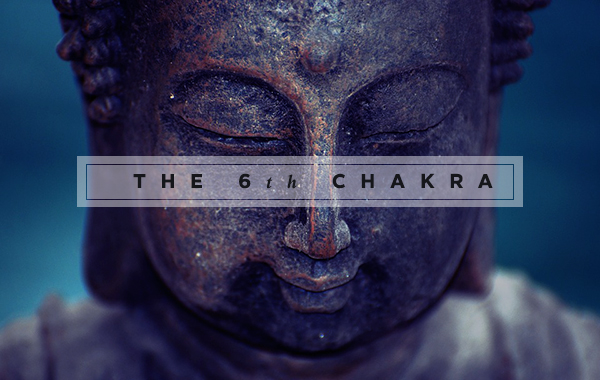 Most likely you have heard of “the third eye”. And you probably also know its location: the center of the forehead. This is the sixth chakra in the yogic energy system and it’s called Ajna chakra in Sanskrit. Ajna means to command or to summon. It also translates as perception. As we get closer to the top of the head and the last chakra, the energy centers become very subtle. In fact, they become so subtle that they are no longer tied to the 5 elements (earth, water, fire, air, and ether). We rise up into the realms of higher consciousness which is less tangible and harder to access. This is the path of yoga: To access more awakened, authentic and higher levels of being.

The sixth chakra relates to light and the ability to see. Its color is indigo and its seed sound is Om. Our ability to see is not just with our eyes. It’s actually our intuitive ability to see more deeply… to perceive that which isn’t visible to the naked eye. When we begin to awaken the third eye, we see the nature of things below the surface. This applies to the world around us and also the world within us!

The world within us contains both the conscious and the unconscious mind. Buried deep within each human being is a storehouse of mental impressions (samskaras). We are unaware of these impressions much of the time, and yet these impressions color our perceptions of ourselves and the world. By awakening this inner eye, we gain access to these buried mental patterns that often keep us from seeing clearly. They keep us from seeing the truth of our innermost nature and the inter-connectivity of everything. As these mental patterns rise to the surface, the unconscious becomes conscious and clarity is gained. We begin to see what is real or true and what is not. Often we discover what we thought to be true about ourselves or our lives is actually false. We begin to see ourselves at the deepest level. This SELF isn’t the one we were taught to be by the world around us, but the one that was/is always there, beautiful, radiant and unchanging.

Om is the seed sound for the sixth chakra and it also happens to be the vibrational sound of the entire universe. As we begin to see more clearly and understand ourselves, we naturally begin to see and understand the universe, too. The microcosm is the macrocosm according to the yogic scriptures and Om is the vibration of all things. US scientists studying the universe in the 1950’s discovered a sound vibrating through the universe believed to be created with the big bang. When they amplified that sound, what they discovered was Om reverberating endlessly. From Patanjali’s yoga sutras, Om reduces all obstacles on the yoga path and chanting Om is a means to enlightenment by itself.

Try this pranayama practice aimed at awakening the third eye:

“Awakening the third eye” is like slowly clearing away a build up of years and layers of dust on your glasses. The difference in your vision changes not only what you see but how you experience the world.

Sign up for my weekly newsletter to receive simple, smart ideas you can start using immediately, both on and off your mat! You will receive access to my 4 Pillars of Yoga Online Workshop, my gift to you.